the next few years, California progressives face the opportunities and challenges of redistricting, a potential governor recall campaign, nationally crucial congressional races, close to 100(!) state legislative seats terming out, and an opportunity to elect 56 out of 58 district attorneys. And despite having a super democratic majority, our state legislature is still 70% male and too beholden to corporate and wealthy special interests. The next two years are critical to build up our infrastructure and the momentum we need to win a PROGRESSIVE, women of color-led legislature to realize a more progressive California.

This series will cover these issues and the work of California Donor Table and our partners to advance the progressive movement between now and 2022.

From Winning to Co-Governing- March 14

The first webinar in our “Next Stop 2022” series was “From Winning to Co-Governance.” We first heard from CDT grantee and ED of SF Rising, Emily Lee. She spoke on the rising violence against AAPI communities, specifically women, nationally, but also in CA. We then heard from CDT ED, Ludovic Blain about the strategic future of the organization and what’s on the horizon. The bulk of our event was a panel discussion moderated by Close the Gap CA ED Susannah Delano. Our Panelists, Assembly Majority Leader Eloise Gómez Reyes, Sky Allen from IE United, and CDT Board Member Karen Grove covered what CDT, our grantees, and our endorsed candidates accomplished in 2020, hurdles and opportunities for progressives to win over the next few years, and ways progressive donors can make the biggest impact.

The California Recall: A progressive lens on the recall of Gov. Newsom- April 14 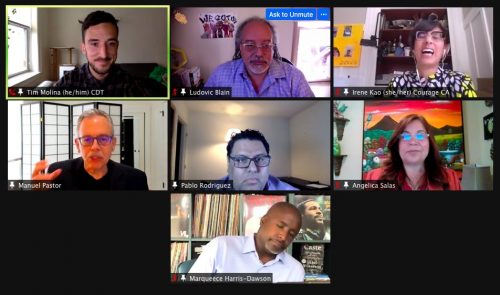 CDT’s Tim Molina organized our second Next Stop: 2022 webinar “The California Recall: A progressive lens on the recall of Gov. Newsom” alongside Voices for Progress, Solidaire Action Fund, Airlift, the Democracy Alliance, Way to Win, Movement Voter Project, Committee on States, and Latino Community Foundation. If you missed it you can watch the recording here.

Our speakers made a few important points clear: