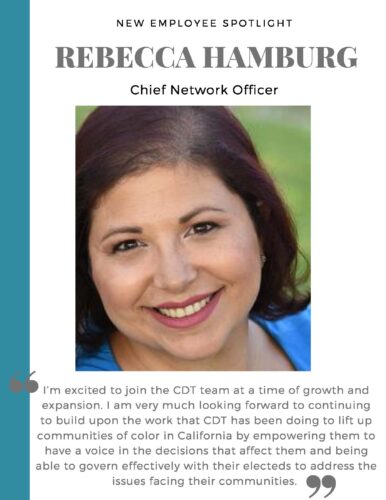 Rebecca, Tell us a little bit about yourself:

I’m a native Californian, born on the Peninsula south of San Francisco. My mom was born and raised in Montebello and much of her large Mexican family still lives in Southern California, including my 30+ first cousins. My dad’s family came to California (also to Montebello!) when he was 3 years old, but moved to Foster City within a decade and put down roots there. His much smaller Jewish family is scattered all over the place now, including near Joshua Tree, and in Arizona, Florida, and Israel. I spent much of my childhood abroad in Germany and then Japan. It was a wonderful way to grow up, and I still love to travel and immerse myself in other cultures. We always seemed to land back in California, though!

I went to college at UC San Diego, then relocated to the East Coast for several years, including law school at the George Washington University Law School. I practiced law in Washington, DC and Philadelphia before a family emergency brought me back to Los Angeles. During my years in private practice, I represented federal workers and private employees in individual and class actions around the country. I also litigated police misconduct, priest abuse, and international human rights cases. A very broad civil and human rights practice.

Over a decade ago, I moved into the nonprofit sector, first with the National Employment Lawyers Association where I led their amicus curiae program, filing dozens of briefs in the U.S. Supreme Court and federal Courts of Appeals each year. I also led their judicial nominations work including spearheading a professional diversity project to expand the pipeline of public interest attorneys as well as public defenders on the bench. I’m very proud to see that the Biden Administration has finally made this form of diversity a priority for their judicial picks. I later moved to Alliance for Justice where I led their work outside of Washington, DC including opening their office in Los Angeles as well as one in Texas, and providing counsel and guidance to nonprofits and foundations across the country. I began my own consulting firm in 2016 to embrace my passion for organizational development and legal consulting which allowed me to work with nonprofits and foundations to understand the rules for engaging in and funding advocacy work and incorporating it into their strategic plans.

I’m also a single mom of two young boys who keep me on my toes and remind me of the importance of balance in our lives.